Last Thursday as I stood in line at the Beijing airport I realized that my trip to Beijing marked my tenth international flight. Which means when I head off to the UAE I will be starting a new chapter of international travel, in more ways than one.

On June 21 I awoke at 3am, climbed into a cab at 3:30am and by 4am was on a school bus with six students from WHS. Two flights, three in-air-movies and over 16 hours later we arrived at the Beijing RuYi Business Hotel. The first day of our quick trip to Beijing was spent getting to know the neighborhood and shopping at the local grocery, Wu Mart.

Taking a Dragon Boat ride at the Summer Palace.

For the next five days we hit many of Beijing’s tourist hotspots. The students in my group were not experienced travelers, but they were awesome! They tried all the food, enjoyed all the locations and rarely complained or whined about the trip. To be honest, I was worried. I don’t really have much patience for complaining while traveling, so I was blissfully happy that my students were enjoying their experience. 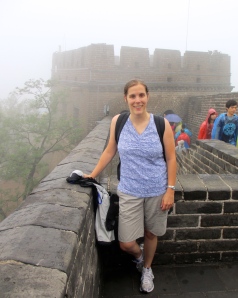 As you can imagine, five days in a city like Beijing is not a lot of time, but we made the most of it. Thanks to our trusty guide, we were able to try local cuisine and learn about interesting cultural and historical events. We even survived the Chinese-style toilets!

Taking in the view of the Bird’s Nest.

Now that I’ve finished the Beijing trip, I need to really focus on the big move. In the meantime, I’ll continue to procrastinate by sitting on the couch watching the Olympic Trials and Wimbeldon. 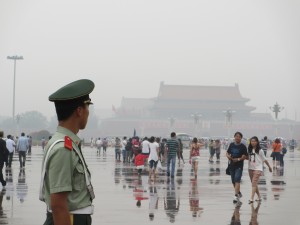 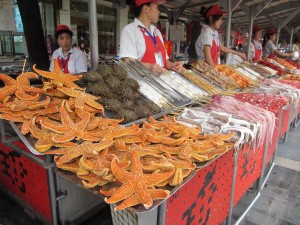 Lots of interesting food at the Night Food Market. 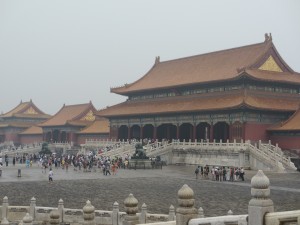 Inside the Forbidden City

International flight number eleven will take me to Abu Dhabi and to many new adventures.

I am teacher and traveler blogging my experiences living as an expat from the USA. From 2007-2012 I lived and worked in Oregon, USA. From 2012 (when I started blogging) to 2014, I lived and worked in Al Ain, United Arab Emirates. In August 2014 I begin living and working in Santa Ana, Costa Rica.
View all posts by Andrea →
This entry was posted in Bucket List, Travel and tagged dragon boat, tiananmen square, travel, vacation. Bookmark the permalink.

2 Responses to Beijing State of Mind