First things first, last week when I was walking home from school for lunch I came upon an iguana. He was quite large. 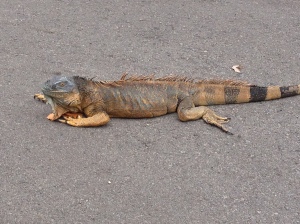 I have been super busy with work, which has been good, but I’ve not had a lot of time to sit down and post, for which I apologize. I also had a crazy week trying to get my shower issues sorted out in my apartment (the shower wouldn’t turn off!) and have just been a bit too busy to sit down and formulate a thought for the blog. After all, the 2014-15 TV season started!!

But I did make it to the Feria Verde in San José, which translates to “green market”. It is like a smaller version of the Eugene Saturday Market and I plan to go there at least once a month. I saw they had gluten free waffles, so I have to go back for sure! Here are two pictures from the morning trip to the Feria Verde.

Some great food vendors with lots of natural options. 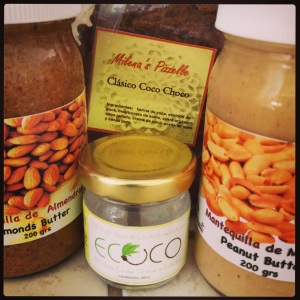 I finally found peanut and almond butter without any additives!! Also got some yummy GF snacks and some coconut oil to try.

San José has a cool program called Enamorate de tú ciudad, which means basically fall in love with your city. And they provide activities for people in the city’s parks on the weekends. Here are some of the activities happening two weeks ago. 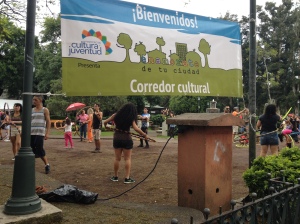 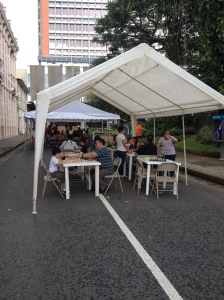 An area for board games (checkers, chess, etc).

And last but not least, I snapped a lovely photo of this guy in my classroom.

I am teacher and traveler blogging my experiences living as an expat from the USA. From 2007-2012 I lived and worked in Oregon, USA. From 2012 (when I started blogging) to 2014, I lived and worked in Al Ain, United Arab Emirates. In August 2014 I begin living and working in Santa Ana, Costa Rica.
View all posts by Andrea →
This entry was posted in Costa Rica, Expat Life, Food, Gluten Free and tagged almond butter, board games, butterfly, feria verde, gluten free, healthy food, hula hoops, iguana, iPhone photography, peanut butter, San Jose, vegan. Bookmark the permalink.