It has been a few days and I’ve been able to process most of what I did and saw on my short trip to India. I joined another Escape Travels (Escape Dubai) trip this past weekend. We visited what is known as India’s “Golden Triangle”, which consists of Delhi, Agra and Jaipur. This trip was a bit of an emotional roller coaster for me. I knew that I would see a lot of poverty in India, but I wasn’t prepared for what I actually saw. I was also very surprised at the high level of security we encountered at our hotels and the various tourist sites. But I believe to really learn from travel, you have to go outside your comfort zone, and this was a good learning experience for me.

Our tourist activities began in Agra at the fort, which provides a nice long distance view of the Taj Mahal. We spent the latter portion of the evening at a Bollywood inspired show about the history of the Taj Mahal and enjoyed a delicious dinner and good company.

The following day, we had an early wake up to see the Taj Mahal up close. 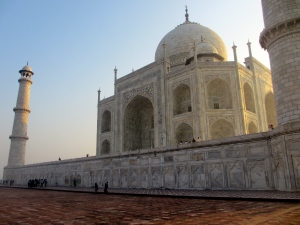 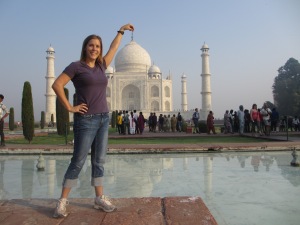 Having fun with the camera!

After touring around the Taj we headed out of Agra and toward Jaipur. Jaipur is a beautiful  city, known as the “Pink City” because of the dusty rose-colored buildings of the ancient city center. We visited a site called Jantar Mantar which is an ancient astronomical site, which can still be used today. Then we visited the City Palace, the home of the Maharaja (ruler of the area).

The following day we headed to the Amber Fort. We rode elephants up to the fort and then toured around for a bit. Wonderful views of the valley and the fort itself is lovely, as well.

The whole Escape Dubai group inside the Amber Fort.

View from the fort.

After a long drive back to Delhi, in bumper to bumper traffic, we arrived just in time to have a relaxing dinner and prepare for our final day. On the last day we toured some sites in New Delhi. We started at a Sikh temple, which was very beautiful. We also visited the location where Gandhi spent his last days and also where he was killed. And we drove through the government area, which is a stark contrast to the rest of the city. Here there are green manicured lawns, no poverty and no trash or animals in the street. 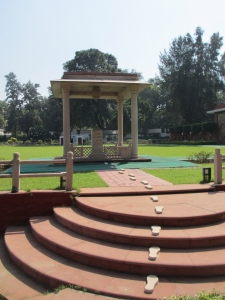 Where Gandhi lost is life.

And of course, I had to get my picture taken with a green and yellow tuk tuk. 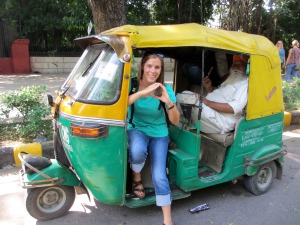 I am teacher and traveler blogging my experiences living as an expat from the USA. From 2007-2012 I lived and worked in Oregon, USA. From 2012 (when I started blogging) to 2014, I lived and worked in Al Ain, United Arab Emirates. In August 2014 I begin living and working in Santa Ana, Costa Rica.
View all posts by Andrea →
This entry was posted in Bucket List, Expat Life, Travel and tagged Agra, Amber Fort, Delhi, elephants, India, Jaipur, New Delhi, Oregon Ducks, Taj Mahal, University of Oregon. Bookmark the permalink.