After spending a few days in Al Ain, we were ready to head to Jordan. I had been telling my parents that if they were going to fly all the way here they should see more of the region. I fell in love with Jordan when I was there in October. I contacted Laura at Discover Jordan again and she helped me plan a quick, 48-hours in Jordan.

We used Petra as our home base. After arriving in Jordan’s new airport (it is so much nicer and more organized than the previous terminal) we were whisked away to our hotel, Petra Moon. We had a nice dinner and headed to bed. We had an early morning ahead of us.

The following morning we set off to explore Petra “through the back door”. Following a local Bedouin guide through “Little Petra” into Petra. Our guide was a man of little words and swift feet. The hike took us through some interesting rock formations and abandoned Bedouin camps, and delivered us into Petra at the deserted Monastary. The hike had some difficulties, but in general it was nice and provided a different way to see Petra.

Our guide on the trail through “Little Petra”. 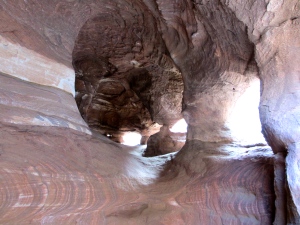 Amazing colors in the rocks.

We explored Petra and my parents even rode camels! Petra is an amazing place, too hard to describe. Hopefully these photos will help.

Talking with our guide. 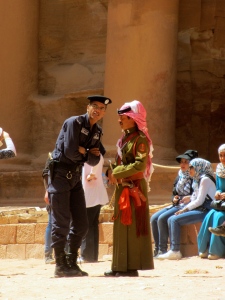 After Petra we enjoyed a nice lunch and then got ready for our evening adventure to Wadi Rum. We were supposed to do a jeep safari and watch the sunset, but there was too much sand/dust in the air for a good sunset, so we headed to another location to explore a bit and then to dinner. At dinner they showed us a traditional Jordanian way of cooking chicken, buried in the sand. 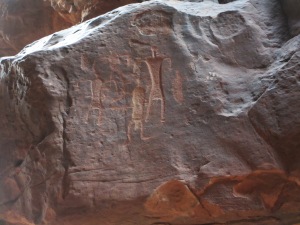 On our last day in Jordan we visited the Dead Sea, via a very windy road through picturesque country side. The road was rough and a bit scary at times, but the views were nice and we got to see a lot of the real Jordan.

We visited the Amman Tourist Beach where we swam in the Dead Sea and enjoyed lunch. After a relaxing time, we headed to the airport and back to the UAE. It was short but sweet. I still love Jordan, I hope my parents liked it as much as I do.

Having too much fun in the Dead Sea.

I am teacher and traveler blogging my experiences living as an expat from the USA. From 2007-2012 I lived and worked in Oregon, USA. From 2012 (when I started blogging) to 2014, I lived and worked in Al Ain, United Arab Emirates. In August 2014 I begin living and working in Santa Ana, Costa Rica.
View all posts by Andrea →
This entry was posted in Bucket List, Travel and tagged Amman Tourist Beach, Dead Sea, Discover Jordan, Jordan, Petra, Wadi Rum. Bookmark the permalink.