A Cruise and a Desert Storm

This morning I tried to be strong, but my tear ducts just wouldn’t allow it. After two weeks of vacation with my parents, I said goodbye to them this morning. For whatever reason, saying “goodbye” or “see you soon” to my Mom is always difficult. None-the-less it had to be done, and now I have to prepare myself for the start of the third trimester.

We had a fun two weeks of vacation and it was wonderful! I left off my last post as we were leaving Dubai and heading to Fujairah. After a few wrong turns (the road construction is brutal on the GPS) we finally found our hotel in Fujairah city. We spent a couple hours getting settled in and enjoying the warmth of the afternoon sun at the pool. We ventured out of the hotel to a nearby restaurant for dinner. I was starving so I ordered some baba ganoush for a starter. My mom was a bit skeptical at first, since I wouldn’t tell her what it was, but we all enjoyed it.

The following day we set off for Dibba, Oman in order to board a dhow for a cruise in the Indian Ocean. With two different maps and the GPS, I still had some problems finding the road to the border crossing. After circling around for about 15 minutes we finally asked in a travel agency and got set on the right path. Only to arrive at the border post and find out that our cruise company hadn’t turned in our paperwork. A phone call and a few minutes of waiting and we were through the border. Sadly, my parents weren’t able to get their passports stamped at this border.

We arrived at the Marina but had no idea where to go. Luckily a nice employee of a completely different tour company (Al Marsa Musandam) helped us figure out where to go and where to park and basically everything else we needed. We then spent the remainder of the day lounging on the boat and swimming in the ocean. A very relaxing afternoon. 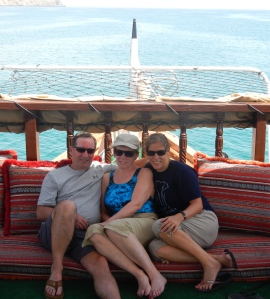 Cruising on the dhow in the Indian Ocean. 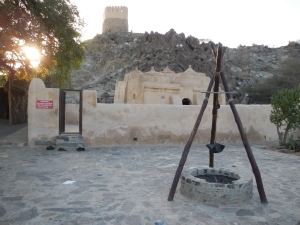 The oldest mosque in the UAE, believed to be built around 640 CE.

The following day we left Fujairah for Al Ain. We arrived in Al Ain around mid-day and decided to stay in. We had a nice evening in my flat cooking and looking at all our pictures from the first part of the vacation.

The next two days I took my parents on a tour of Al Ain. We went to some of the parks, to my favorite Starbucks, the souq, some malls, the Palace Museum, camel race track and much more. We had a great time exploring until a storm on Saturday shut us in for the remainder of the day. It was a pretty bad storm! Saturday night I awoke to thunder and lightning and no power. The power was restored pretty quickly, but the storm raged on. We even encountered some flooded streets, and heavy rains our our way to Dubai on Sunday. Sunday afternoon we left the stormy UAE for a quick 48-hour tour of Jordan. 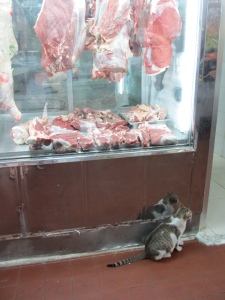 Cat in the meat souq…

Plumerias at the Palace Museum. Love!

Serving some drinks in the Palace Museum.

I am teacher and traveler blogging my experiences living as an expat from the USA. From 2007-2012 I lived and worked in Oregon, USA. From 2012 (when I started blogging) to 2014, I lived and worked in Al Ain, United Arab Emirates. In August 2014 I begin living and working in Santa Ana, Costa Rica.
View all posts by Andrea →
This entry was posted in Al Ain, Expat Life, Food, Travel, UAE and tagged dhow cruise, Fujairah, Indian Ocean, Musandam, Oman, post-vacation blues, saying goodbye. Bookmark the permalink.

4 Responses to A Cruise and a Desert Storm