Yesterday morning I set off for Dubai for the first time since I’ve been here. Well, to be fair, I’ve been to the airport, but that doesn’t count. I was headed to Dubai to brunch and shop, sounds good right?

I arrived in Dubai in the morning and checked into my hotel. Since I was early I wasn’t able to go to my room, but I was able to finish the check in process. I had booked a studio apartment at the Tamani Hotel via a website called lastminute.com. This was a bit of a risk because I used their “secret” hotel option, which means you don’t get to know your hotel until after you’ve paid. But the Tamani was good. In fact, they upgraded me to a suite. In fact it was a GIANT suite, but most of the doors were locked. So I had access to only some of the suite: 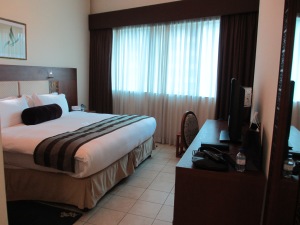 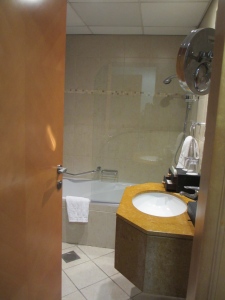 Hallway with many locked doors!

You can see it was a bit more hotel than I needed for one night! After getting my room sorted out, I headed to Mall of the Emirates. It is an interesting mall. For those of you who don’t know, this mall has Ski Dubai. The indoor ski/snow sports area. Such a strange thing if you ask me, but it was pretty busy, so not strange to everyone. After some quick shopping (I’m trying to get winter clothes for my vacation to Europe) I headed back to my hotel to get ready for brunch. I met some friends from the triathlon training group for the Westin Hotel’s Bubbalicious Brunch.

The brunch was amazing. I was seriously so sick I could hardly sit!! But the food was so good. I had foie gras for the first time and maybe the last…but you have to try it, you know?  I even had a mojito that had been made with liquid nitrogen. There was so much food I didn’t even see all of it. It was well worth the price tag, though not a brunch you can do every weekend (well some probably can, but I certainly can not). Here are some other interesting food options.

After the brunch we headed to a nearby bar, Barasti Beach Bar. The setting, right on the beach and casual, was great. It was relaxing and there was a good crowd, but the service was horrible. It took ages (and multiple requests) to get anything. It appeared to be very understaffed or disorganized or both. We stayed here for a while then headed to the Media Rotana via a Lexus taxi. The pool bar/restaurant was a perfect way to wrap of the evening. Good city views and atmosphere. So far I’ve not been disappointed by a Rotana in the UAE.

Today I did a serious amount of shopping. I actually dislike shopping, unless it is for groceries. But sometimes you have to do it. My day started at the Dubai Mall, which is right next to the Burj Khalifa, boasted as the tallest building in the world. It is quite tall, I couldn’t really get a very good picture of it. 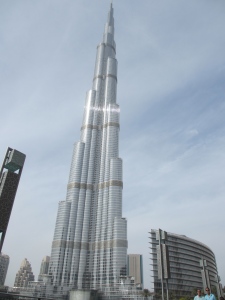 I think I got the whole thing!

I really like the Dubai Mall there are all kinds of options for shopping from super high-end to H&M and The Gap. There are a lot of good food options as well, some of them have outdoor seating where you can look out at a pretty nice view while dining (the above building for example). After a few hours at the Dubai Mall I headed to a neighborhood known for having quality “fakes”. As in bags, watches, shoes, etc.

I have been coveting a Burberry Iconic Check scarf for many, many years. But with a nearly $400 USD price tag, I can’t really bring my self to purchase one. I decided I’d try my luck in Al Karama. WOW! I am so glad I promised myself I would only spend as much as I had in cash. I could have easily spent a TON of money. The bags/purses are top of the line knock offs and there is a variety of quality depending on where you go. I walked out of there with the Burberry scarf I’ve been wanting (for $15 USD) and a nice Rolex. I am one happy lady!

After this, you’d think I would be done shopping. But I had just one more stop before the drive back to Al Ain. The Dubai Outlet Mall. Another interesting place. Lots of high-end outlets but not quite like the Woodburn Company Stores. I’m sure there are deals to be found here, but I was pretty shopped out by this point. Again, another great weekend. With new friends and new adventures.

I am teacher and traveler blogging my experiences living as an expat from the USA. From 2007-2012 I lived and worked in Oregon, USA. From 2012 (when I started blogging) to 2014, I lived and worked in Al Ain, United Arab Emirates. In August 2014 I begin living and working in Santa Ana, Costa Rica.
View all posts by Andrea →
This entry was posted in Expat Life, Food, Friends, Travel, UAE, Wine and tagged Al Karama, brunch, Burj Khalifa, Dubai, Dubai Mall, Mall of the Emirates, Rotana, shopping, Tamani Hotel, westin hotel. Bookmark the permalink.